I’ve done pretty much everything I can, been run off my feet for days, but it’s all done now and I’m sat on JL422 writing this on Windows Live Writer.

So, my last 3 days in France

On Sunday 8th March we headed to Marseilles for the day. I’ve landed there plenty of times so wanted to see what it’s like…

Hardly bad is it!?

We had a quick lunch of Moule et Frite, but we really wanted to get out to the island of Frioul. This is a ferry ride across the bay, basically out into the Med. Now, a ferry ride is nothing right? I’ve been pissing about on boats since I was 5. But this one was a bit choppy… 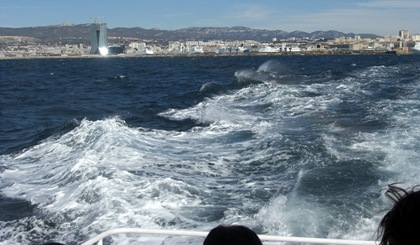 People were looking a bit queasy and running off the boat when it docked! I on the other hand got up to to a high point and took a panoramic

Click on that for a the larger one. The island is actually 2 islands linked by a permanent harbour wall to create a sheltered area.

That building down there is a fish farm, but it was a quarantine hospital for sailors arriving back from Africa many years ago.

On the way back, those seas gave the ship a bit of a pounding again… nothing like a young girl chucking up green vomit all over her parents and the floor to add charm to any voyage.

Now, at this point in writing I can feel myself getting tired, so I’m going to have to speed up… please, no comments thanking me for that.

The day after we headed to Arles. We had to pick up some framing materials but made a day of it. The main thing about Arles is that it’s a Roman town, complete with coliseums! Tick that off the list!

I’ve been dying to go to one for ages… but unfortunately this one, as good as it is, is a bullfighting ring in its spare time…

Had to leave the borders on that, it shows the place… but perhaps a better view was had at the top! 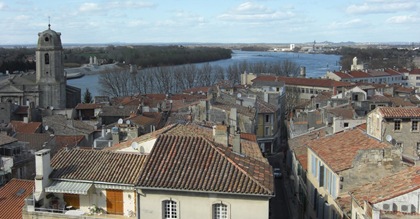 What a fantastic town! The catacombs of the coliseum were amazing and still faithful to what was there in Roman times. 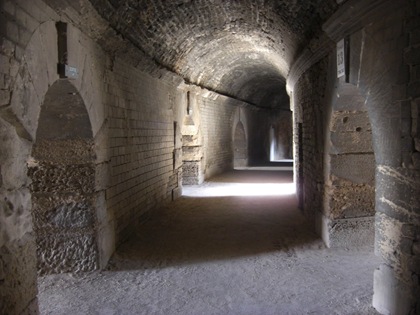 A total highlight for me!

The next day I flew back. Note to self: You cannot get into Nice as easily as you think from the airport. Don’t assume 2 hours is enough time to go in on the bus and get a relaxed lunch!

However, when I got back, somewhere in Liverpool John Lennon Airport, I lost my bloody wallet. Just what I needed 3 days before flying to Osaka!

Fortunately I had my Visa in my passport wallet, and could still fly… bloody hell though!

Quite a lot of time in the car the last few days. I’m sat here writing this, listening to The Photographer, his Wife, her Lover on BBC Four… it’s rather interesting, but does appear to be about a bunch of nutters.

Well, the last couple of days… we headed to Mazaugues, where Mum was convinced there was a walk to be done. On the way she told me she hadn’t actually looked at a map… when pushed she admited she didn’t know there was a walk. So, I grabbed her Nikon D2X to see what I could do with it…

More of those planetrees

Took ages playing around getting this. not that used to full DSLRs

I think I'm getting better, the results are miles better than the Casio when you get it right

So we then headed off to a Monistary, pretty much built into the side of the Baume, which was believed to be the hiding place of Mary Magdalen after the death of Jesus. Since then, the cave in which she hid has been turned into a monistary where a silent order of monks live.

The hike up, however, provided most of the good photos… since I spent the most time on it. Mum was coming with me and didn’t quite keep the pace… I had plenty of time.

This was not a hike, there were stairs

By the time I ascended the 600 vertical metres, the monistary itself seemed a lot bigger than it did at the bottom.

The monistary, and that is a mountain behind it... it was big

On the way up we kept hearing falling, crashing sounds. These icicles explain that

The view... totally worth it

That hike was certainly worth it when we got up there. We had 15 minutes but had to come back down as we had to race back to the shop to get Bob off to his French lesson. Since we were short of time, we/I had to break the no fast food rule… but the again I did get to take a blurry shot of an achieved life long ambition…

Beer with McDonalds! I want it at home, but the UK isn't ready for it yet.

The rest of the day was spent at the shop setting up a new website for them (well, I would have if the content had been ready) and migrating the email to Google Apps (which went very smoothly and is great!)

Today was the trip to the Verdon Gorge, which is easily one of my favorite places in the South of France. The drive up there was rather windy… in fact most of the day was in the car to take in the view.

A panorama of the plains as you approach the Gorge. Click the image for the large version to see the detail (it's worth it! zoom in and scroll around)

We stopped at a Comps-sur-Artuby for lunch and found there was some sort of (car) rally going on… and we had wondered into the support staging area.

They were taking it all very seriously... even had sponsorship

These, and people walking around in Nomex suits, gave the game away! It was a a rally

You can see them slightly in the background there, there were loads of tents/trucks to support the incoming cars. I think they were mostly classics rather than modern ones, but it was interesting non the less.

We pressed on to the Gorge itself… and stopped at a great viewing point where I took this second panorama:

This was about 12 shots in total, stitched together. I had to leave the blackborders on to get everything significant in.

Again, you might want to zoom in there to get an idea of just how big this place really is… it took 12ish photos to get all that stuff in! No photo can do the scale of it reall justice. On the trip along the Gorge we were over 1200m at some points.

That cave was huge! And that is snow in the background!

There was snow at the higher altitudes too, there hasn’t been any in weeks but it was still there!

The Verdon heading into Lac St-Croix in the distance

We headed down to Aiguines, again, deserted due it to it being the off season and got a bit closer to Lac St-Croix, which is brilliantly blue from up above.

This photo doesn't do it full justice

After getting some decent air at the lake, we headed back again… pretty extensive roadtrip that! I had the GPS unit going the whole time for geotagging purposes (so I could associate photos to places), and flung it into Google Earth when I got back:

Now I have to go sleep off this carsick feeling.

Remind me when I get started that I need to have a good mixture of drinking and going out and seeing places… I have to have both. I’ve been staying with the parents for 2 weeks so I’m not getting a great deal in the way of going out, but I have a feeling in a few days that won’t be a problem.

And don’t get me wrong, I am having a good time!

After I put up the last post with the moose head driftwood thing, we had a barby (just had to get that one out the way) back at Les Papillons and I started on the (bloody fantastic) wine down here. Had quite a bit of that over the last few days.

The Tuesday, the first full day, was a lazy start, we headed for lunch at La Capte.

Bit quieter during the winter - this place would be heaving in summer!

Was the best day for weather, so far at least. Earlier at the shop I noticed some driftwood clocks that Bob had been making, so we foraged out some more materials for those. After that it was off for a wonder round a Monistary near Méounes to get a bit more fresh air and to break in my new Raichle Explorer GTX Hiking Boots that I have bought in the Cotswold sale.

Notice a bulge anyone?

The strange thing is, stuff like that seems to happen all the time down here!

Now, Wednesday I woke up rather late… 11:30! I was kicking myself since that was really half the day gone. Most businesses in this area close between 12 and 2 for an extended lunch (if they are open at all since lots close for the winter)… so we pretty much had to get up and head straight off… straight into the pouring rain as well! We did shopping related things, and later I set up the ADSL at the shop… bit plain.

Today, determined that I would not be spending one of the valuable travelling days like that again, I was up at 9 and we headed off to Le Lavendou for Moule et Frite and a wonder about. Again, it being winter, it kept reminding me I should be up in the Alps…

We then headed towards Collobrières to the North. On the way up the D41, we did notice the view was pretty spectacular.

The whole area is covered in forest, and the camera wasn't coping that well with the low sun

Another one further down the road

Once we got to Collobrières, there was bearly a soul in sight! It seemed to be known for its Glacie Chestnuts and had a lot of places showing how they were made… but I’m not after them. Definately would be better in the summer, but it was a bit quiet now. I did notice these signs in quite a few shop windows:

Still accepting Francs? What's that all about?

I didn’t ask since my French is still, well, non-existant, so I snapped a this shop of the town square. The Planetrees are a common sight around here. They were planted during Napoleonic times to keep French soldiers cool as they approached towns, so all towns were ordered to plant them.

After that we headed back to the shop so I could do a little more free tech support on Bob’s laptop, fix their new mobile and generally do all the handy things I normally do.

Tonight I think it’s time to watch some more of By Any Means to get me in the travelling mood! Itching to get to Japan and be on the trip proper! Kronenbourg anyone?